A quick-fire retro PC review, where Kyle Katarn learns the ways of the Force. For the time, the technology in Dark Forces 2 is impressive but the level design suffers from the 90s PC game cliché of big maps and no clear objectives. Gameplay is fun, especially once you get the lightsaber but the best part of the game is getting to play as Kyle Katarn, the Star Wars EU’s best character.

The first couple of levels of Dark Forces 2 are essentially the same run-and-gun gameplay as the first Dark Forces game. You play Kyle Katarn again, and after the third or so level of blasting stormtroopers with his Bryar pistol Katarn meets 8t88, a droid who makes his living by trading information. 8t88 tells Katarn that his father was killed by a Dark Jedi named Jerec. Kyle returns to his home planet of Sulon to watch some old holo recordings of his dad. Turns out his old man was pally with a Jedi called Qu Rahn. Qu Rahn had survived Order 66 but was also recently killed by Jerec. Kyle’s dad had been keeping hold of Qu Rahn’s old lightsaber and he gifts this lightsaber to Kyle, telling him to “use it for good”.

Now apparently by virtue of owning a lightsaber, Kyle then starts to develop Force powers. Yeah, this is an early part of the EU and while it’s never been explicitly explained how the Force works, I’m pretty sure it’s a bit more complex than “have lightsaber, will travel”. I mean, there’s not even any midichlorians. 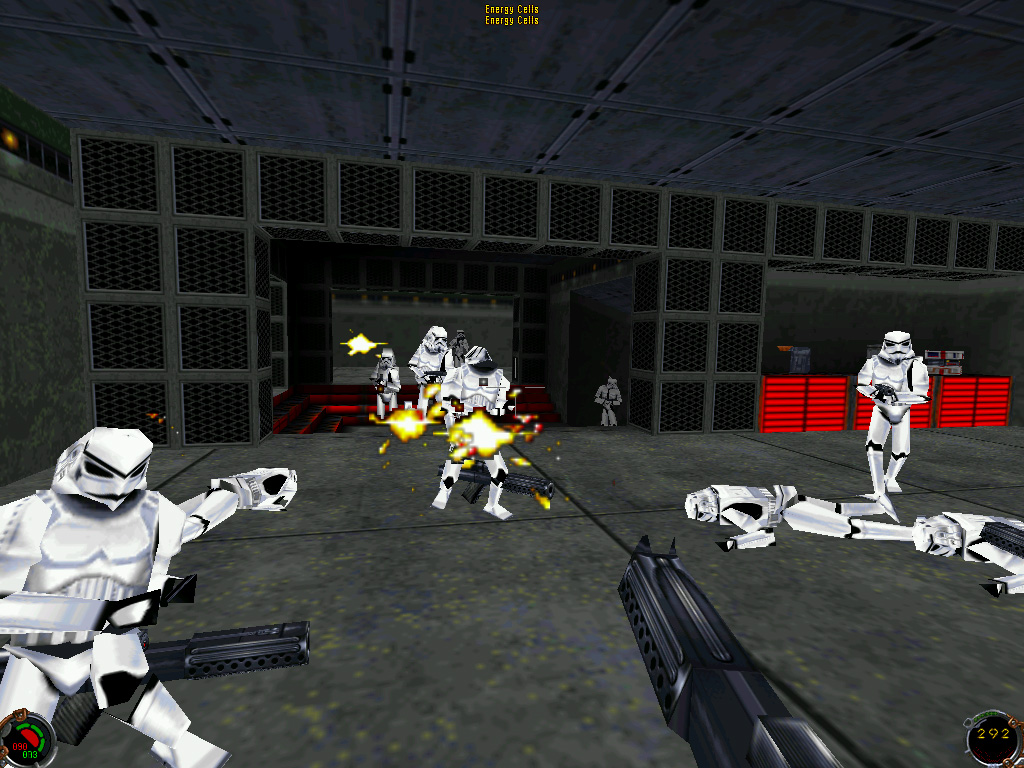 Jedi Knight is set in the wake of the destruction of the second Death Star and pits Kyle against the Dark Jedi, a sect of evil Force-users who formed in the power vacuum left after the death of the Emperor. The leader of The Dark Jedi, Jerec, is looking for the Valley of the Jedi, a place of unimaginable power which Jerec wants so he can re-shape the Empire in his own image. It’s also a place that Kyle’s dad used to have a map to.

In customary fashion, Kyle travels from planet to planet, tracking down Jerec and his Dark Jedi, occasionally fighting one of them as an end-of-level boss. Each Dark Jedi has a different fighting style, which can be countered with some lateral thinking. Qu Rahn guides Katarn as a force ghost, and while you might try and listen to his voiceover for each boss, telling you their strengths and weaknesses, the easiest method is just to circle strafe around them whacking them with your lightsaber, with Force Protection turned on. It’s a silly exploit but it worked with every single boss in the game.

Like Star Wars Dark Forces before it, Dark Forces 2: Jedi Knight features huge levels, again suffering from same problems Dark Forces did: no clear level design. You’ll be flapping about with no real sense of direction, and will more often than not stumble upon the right way to go, thinking you’re off-piste. It’s a mixed curse and a blessing as exploration earns Kyle Force Points which he can use to upgrade his powers between levels, but the levels are so vast and with no idea where you’re supposed to be heading you’re exploring by accident rather than by choice.

Guns from the first Dark Forces PC game are present and a few extra ones to boot, complete with the same alt-fire modes as before. The game massively changes on that third level though, with the lightsaber and force powers taking centre stage. Guns remain useful throughout but the lightsaber and powers are lots more fun and are essential for the boss battles. For the first time we’re offered a light or a dark path, each with their own force power sets and even a branching story based on which powers you choose. It’s worth pointing out though that Kyle’s punch has been massively nerfed since Dark Forces, he’s barely able to punch his way out of a wet paper bag now. The Force must have made him soft. 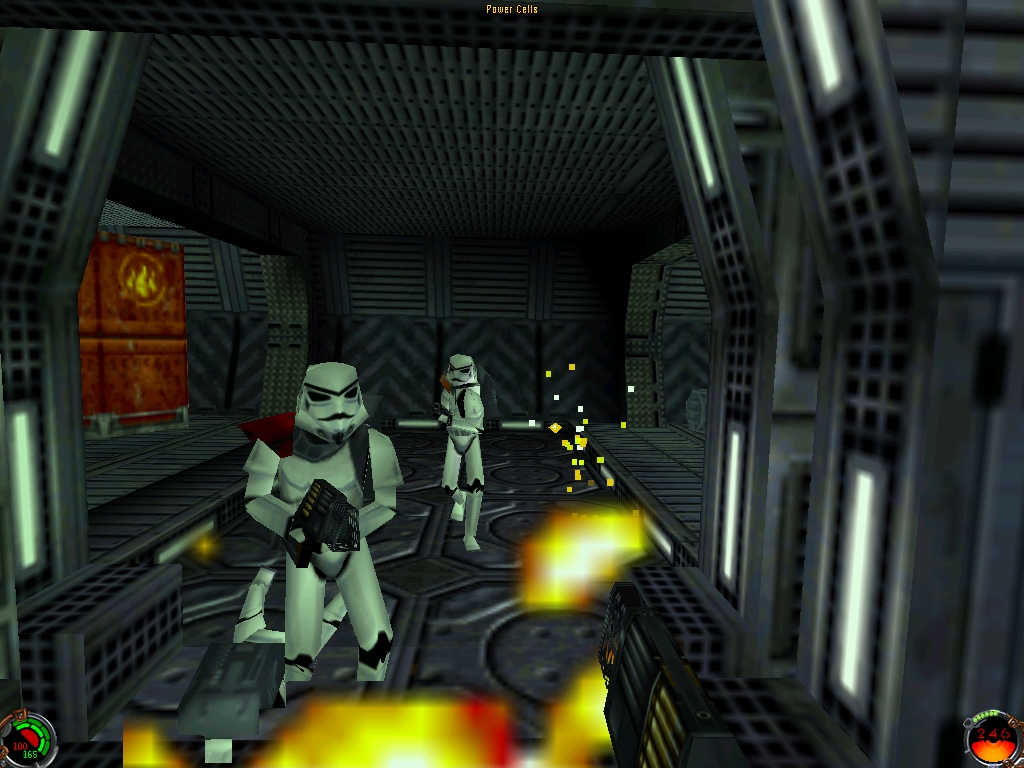 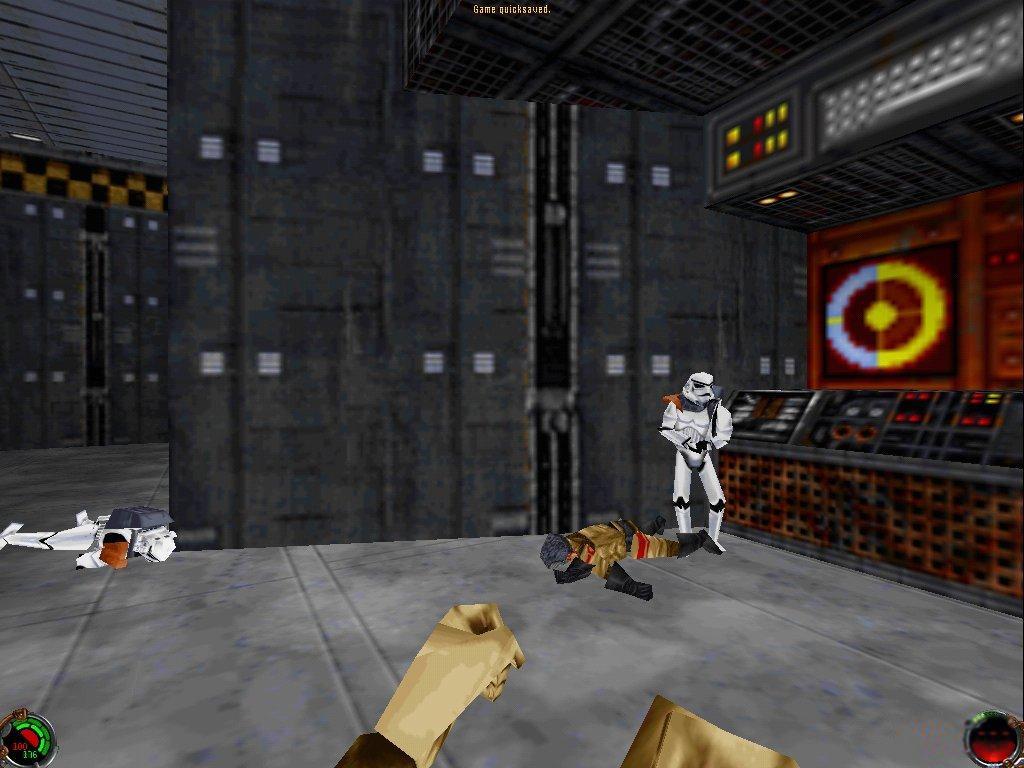 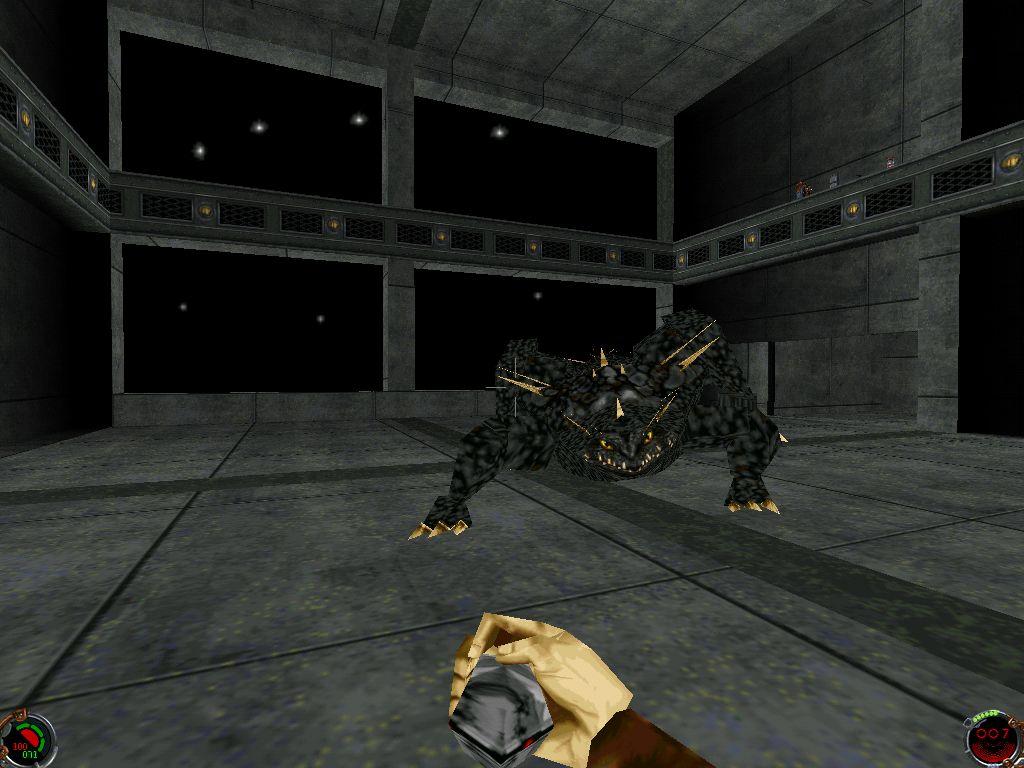 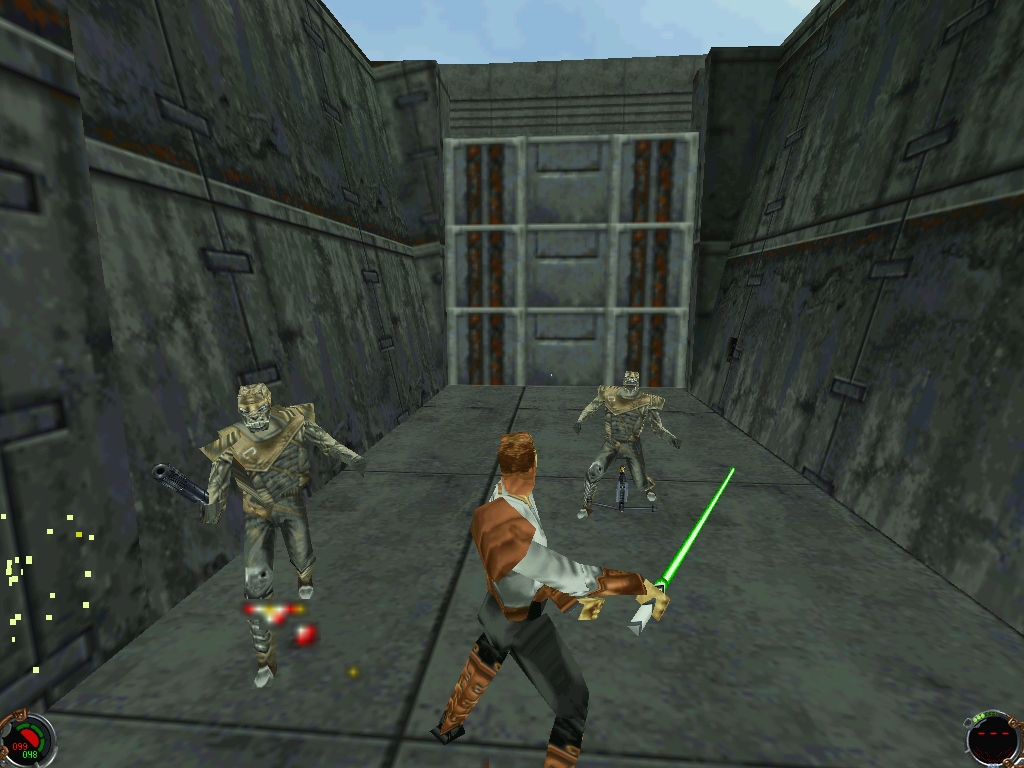 One thing that Dark Forces 2 Jedi Knight is well-remembered for is the Full Motion Video cutscenes. There was a period in the 90s where they thought live-action FMV was a good idea and Jedi Knight was infamous for its campy cutscenes. Sure, it looks a bit dodgy now but LucasArts were trying to make Jedi Knight feel like a real episode in the Star Wars saga. Greenscreen compositing and lightsaber VFX would have cost a fair bit back in 1997 so fair play on them for adding a level of polish that other games developers wouldn’t have been able to. Having ILM next door probably helped in that respect.

Jedi Knight is a decent sequel to Dark Forces, but in my opinion is more of a stepping stone to a better era of games. For a PC game from 1997 it’s a genuine revelation, competing FPSs at the time were still largely sprite-based. Jedi Knight had full D3D support, mouselook and 100% polygon models. In the 21st century though, it’s a hard game to play. If you want to boot up a late 90s FPS you’d have to ignore Quake 2, Unreal, Half-Life, Sin etc or Jedi Knight starts to look a bit basic. If you’re into Star Wars it give you enough of an incentive and I enjoyed it for what it was. Like I said though, the late 90s was an awkward phase for PC games as the transition to full 3D looked pretty awkward in its early stages. Dark Forces 2 is available to purchase on both GOG and Steam, patient gamers you can wait for a Humble Bundle or a seasonal sale. If you liked this, check out my review of Dark Forces 2’s “Mysteries of the Sith” expansion, the best Star Wars game ever made, Jedi Knight II and my full rundown of the Jedi Knight PC game series. 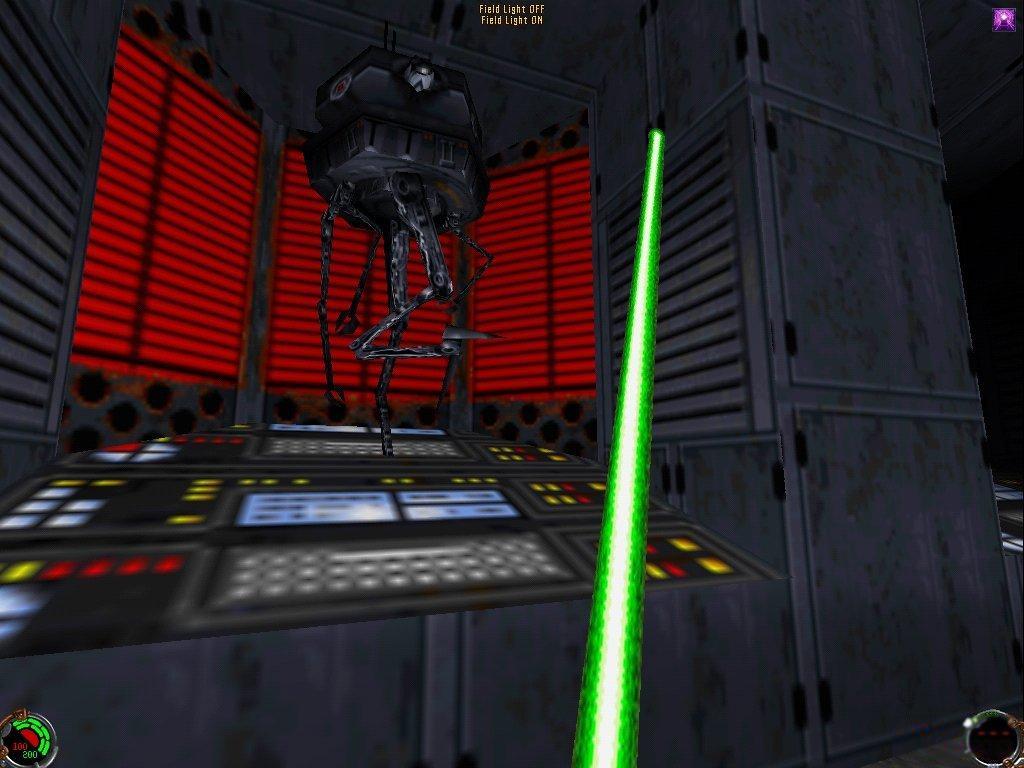 A lot of the screenshots in this review were nabbed from oldpcgaming.net, check them out.

Hellboy: Dogs of the Night