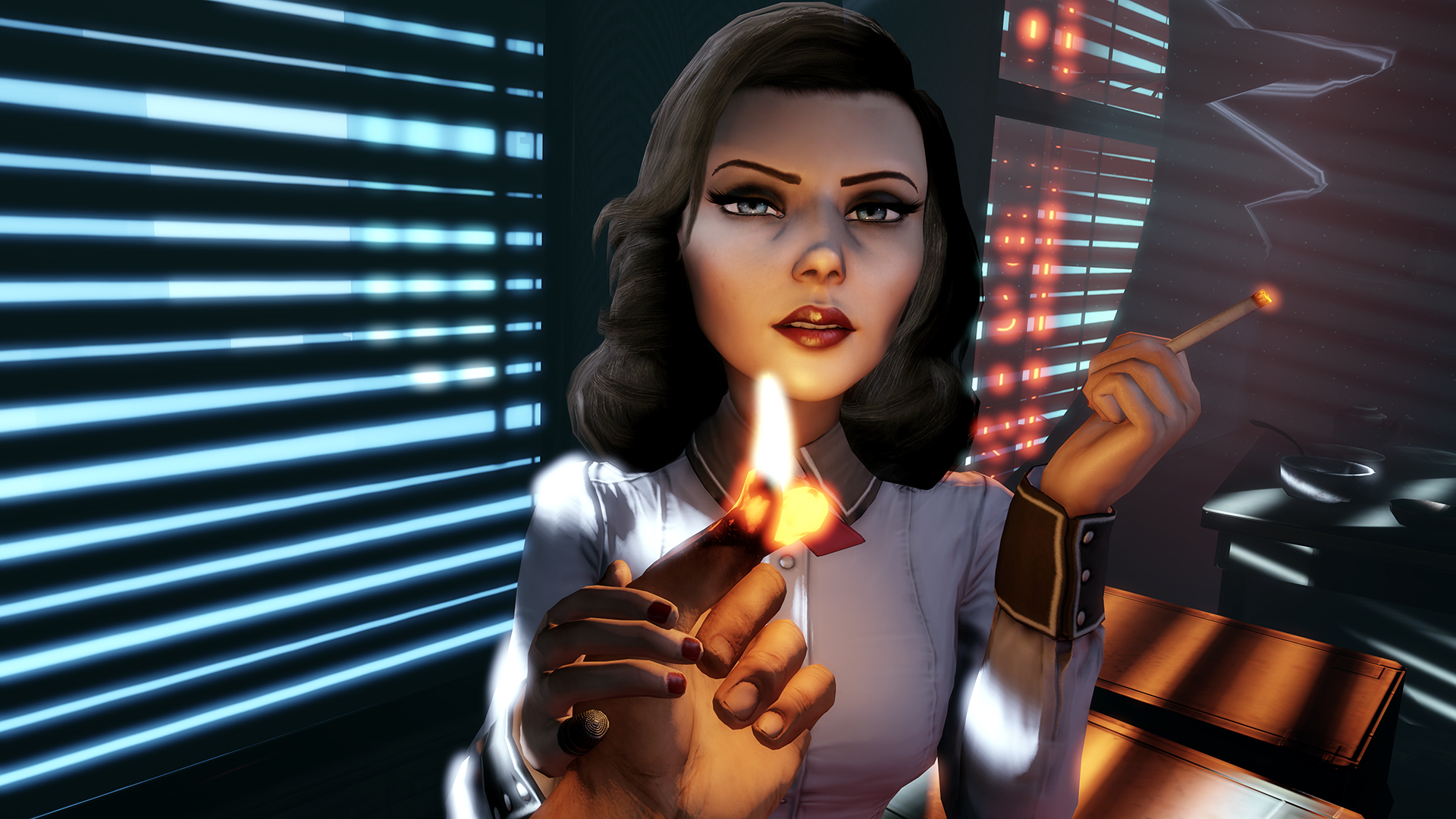 In the opening sequence we’re looking through Booker’s eyes. A silhouetted figure hammers at his office door. Obvious parallels to Infinite are obvious. The camera takes a very deliberate look at Booker’s desk. Among the whiskey glasses and the bullets, Booker’s calendar reads December 31st, 1958. The night Rapture erupted into civil war. The hammering at the door belongs to Elizabeth. Another Elizabeth from another time. This Elizabeth charges Booker with finding a young girl who has disappeared. Obvious parallels to Infinite are obvious.

The first thing that struck me about Burial at Sea is that it looks gorgeous. Bioshock Infinite was already one of the prettiest games ever and this is continued in Burial at Sea. The opening shows a bright and colourful Rapture. Full of the joys of a utopia, free from oppression. This Rapture feels much closer to Columbia from Bioshock Infinite. It feels a world away from the first Bioshock. At this stage I suspect that’s probably the point.

As Booker wanders the promenade beneath the sea, we get to witness Rapture’s halcyon days. The realisation of Andrew Ryan’s vision. We know it won’t last. It’s New Year’s Eve, there’s a matter of hours before Atlas’ uprising tears this utopia apart. As you’d expect, it’s not long before the situation degenerates into chaos. The change happens a little too quickly actually. Like in Bioshock Infinite, the opening twenty minutes of BaS Episode 1 is a walking simulator. Walking through a crowd of glassy-eyed NPCs, triggering proximity events. It shows us the world of pre-revolution Rapture. Burial at Sea gives some brilliant insights into the early Rapture. I really like the way it displays the grace of the Big Daddies, and they they’re held in such reverence in Rapture.

Once the game kicks in we’re back to the same Bioshock we’ve been served before. Only different. Not only are Booker and Elizabeth here, but this Rapture isn’t quite the same as the one we saw back in 2007. It’s those differences that make up the real meat of what the game will be able to offer as this DLC chapter unfolds.

The first obvious difference is the stuff Booker carries about with him. His standard pistol is the Hand Cannon. All of the guns here are all made up from Bioshock Infinite’s selection. I thought the weapons from the original Bioshock were really characterful. I would liked to have seen them here, but not to worry. The gunplay is just as entertaining as it was in Infinite. This is mostly due to the fact that nothing has been changed. Before long you acquire Bioshock’s equivalent to the Sky Hook. It’s called an air grabber in Rapture as there’s no sky to hook onto, but it’s functionally identical to the sky hooks. I’ve got to say it feels a bit forced to shove the sky rail feature into Rapture. There’s some throwaway line to legitimising using them, but I don’t know. The classic Bioshock atmosphere loses something by shoehorning this in. The pneumo lines require much bigger and more open levels to work well, so we lose that claustrophobic feeling. Also being free to skate over pneumo lines and perform easy air strikes dulls the edge of the combat, even on the hardest setting.

Burial at Sea Episode 1 is a weird combination of the two main Bioshock games. It’s not a comfortable mix, the worlds of Rapture and Columbia jut against each other. Plasmids are back, but they take their names and effects from Infinite. No tonics, Burial at Sea uses Infinite’s gear. I’m not sure if this janky mix of worlds is intentional. It adds texture to the storytelling, but the core of Burial at Sea is basically Bioshock Infinite with the lights turned out. I was hoping for more of a Rapture-like experience.

It’s great to be back in Rapture, especially when it is so gloriously realised in the Bioshock Infinite engine. I love the dripping walls, the mad chattering of the Splicers. There’s enough here for Bioshock fans to get a kick out of. Burial at Sea Episode 1 is very short. You can easily clock this in a single sitting. The ending is absolutely excellent, but there’s not much else to it. Eleven quid gets you a tidy narrative vehicle, but the game lacks any real gameplay. I would have liked to see some newness in the core design. Burial at Sea is a film-length DLC episode, but with less content. It’s great to be back but I wanted a bit more substance. Hopefully Episode 2 will address this.