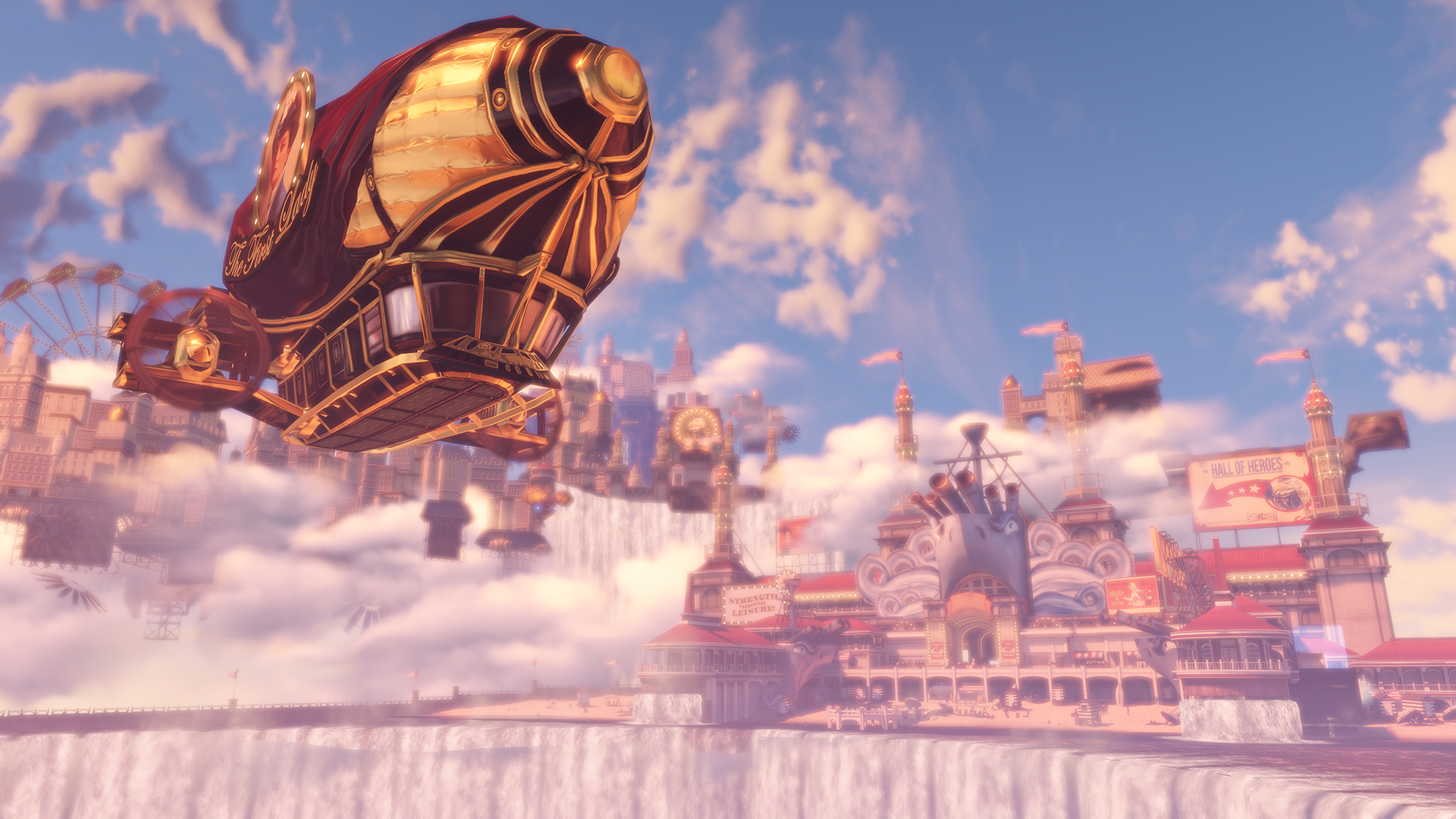 The first Bioshock is one of my favourite games of all time. I make no bones about my affection for it. Reviewing Bioshock Infinite was always going to be a tough job. This third instalment of the Bioshock franchise was headed up by Ken Levine, who designed the original Bioshock.

Set in an alternate 1912, Bioshock Infinite takes place on the floating city of Columbia. Columbia was built to extol American exceptionalism. To float across the globe bringing democracy and liberty to the world whether they want it or not. Columbia’s jingoist society is headed by a zealous visionary called Zachary Comstock. Comstock’s frightening xenophobic litany and his cult of personality feels scarily realistic in today’s world.

Bioshock Infinite packs a lot of story into one game

The jingoism overtone becomes the founding principle of Columbia. Like how Bioshock leant on objectivism, it creates conflict within the player. The opening sequence is really astounding. Years later I can still remember it. You’re a man out of the ocean, you find a lighthouse. Inside is a device which transports you… up. Thematically the two games are the same but different and I love that. And this becomes an important part of the story later on.

Quantum theory has a lot to answer for. Columbia’s levitation is powered by exploiting quantum mechanics. I guess it’s travelling through all realities, finding the one where it doesn’t plummet out of the sky. This mucking about with space-time is having disastrous effects on the city and its people. The fabric between different dimensions has worn thin. Tears have started to form, revealing past or future events and even allowing passage from one universe to another.

Booker DeWitt is our hero and a former Pinkerton. He’s clearly not a nice fellow but he may have a shred of decency in him. It’s established early on that he’s diametrically at odds with the holier-than thou population of Columbia. Booker is in Columbia as he’s been paid to find Elizabeth. She’s equally mysterious and it’s her story that holds Bioshock Infinite together. She’s mysteriously linked to Columbia and to Comstock. It’s the unravelling of that mystery that pulled me through the game. I shouldn’t say any more just in case you’ve not played this 10+ year old game, but the story is brilliant. It gets crazier and crazier toward the end. The finale really messed with my head too. It made me angry, it made me sad. It made me confused!

The open areas of Columbia are a long way from the corridors of Rapture. Since the areas you fight over are so large, you’re encouraged to make use of the city’s skyrails. Booker can use his skyhook to reposition and outmanoeuvre his enemies. It makes combat fast and fluid, letting you gain advantages through manoeuvrability or just escape from the fight to get a breather.

Skyrails are a lot of fun, especially once you get the hang of leaping about from rail to rail, bashing a lad’s head in on the way. Unfortunately the rest of the combat is a bit sub-par. The stylised weapons from Bioshock are out the window, with Bioshock Infinite’s guns being very bland by comparison. You can only carry two at a time, which makes me think someone was playing too much Call of Duty. It might be realistic, but it hampers my options in combat and I never wanted Bioshock to be more realistic. There is a sort of fix for that, and it’s down to Elizabeth.

What’s really refreshing about Elizabeth is she is probably the only NPC in a game who isn’t useless. She takes care of herself. Taking cover during firefights, she’ll even dodge about scrounging up ammo and health for you. Booker can’t carry health packs because Elizabeth takes care of that, so instead you’re given a regenerating shield to tie you over. I didn’t hate this but I never thought Bioshock needed to be more like Halo. There is such a thing as stealing too many ideas I think.

Elizabeth’s most important skill is that she can create and control tears. She can open up rifts in space and summon in new guns, robots or useful pieces of cover. This goes a long way in defining Bioshock Infinite’s identity. It keeps the combat fresh and energetic, allowing you to be flexible when thinks go South. My mate Kevin pointed out though that if she’s opening tears to alternate timelines, how come she can’t summon up a modern machine gun or a spider splicer?

Speaking of splicers, there are plasmids in Bioshock Infinite too. They’re called vigors in Infinite. There’s no logical Adam and Eve thing in Infinite, they just put them in. It works, but Bioshock had that whole ecosystem thing which I thought gave so much richness to the world. It’s pretty wicked how they explain the origin of vigors in this universe. It kind of makes sense how they rationalise the fact they’re just lifted out of Bioshock.

A lot of the changes in Bioshock Infinite are welcome newness. Some of them though are just aping other AAA FPS franchises of the time and for what? Player choice doesn’t seem to have any significant impact on the story. This was a major theme in the first Bioshock but then again trying to catch lightning in a bottle twice would be a mistake.

Visually, Bioshock Infinite is still incredible. Columbia is rendered in beautiful pastel shades and brilliantly lit. The attention to light bloom, tone and shade is unmatched, it’s better than the first game. The eternally sunny skies and the gently hovering buildings gives Infinite a character that you couldn’t try and match. Playing this game on PC with high settings now, it still looks better than games which came out this year. Character animation is brilliant. There’s a hand-made quality to Bioshock Infinite that I always enjoy and helps the game feel timeless.

I can’t say I didn’t enjoy Bioshock Infinite, even after all this time. In fact I really did like it, maybe more than before. The combat is thrilling and vicious, it just feels like someone tried to alter the gameplay to broaden the market appeal.

The story is still incredible. The two main characters are totally captivating. The voice acting is absolutely solid and isn’t something which gets enough props. Without the incredible talent poured into these two characters, Columbia would far duller. The story’s ending hasn’t lost any of its edge. There are still fan theories being generated on its meaning to this day. The setting is absolutely excellent. Columbia is great follow-on to Rapture and the atmosphere helps to make up for any shortfalls in gameplay.

Like the first Bioshock game, this is absolutely solid. It’s not perfect. We’ve seen a lot things in Bioshock Infinite done better elsewhere. If there had been more thought put into to enemy design and less emphasis on aping contemporary FPSs, Bioshock Infinite could have been the perfect game. It’s still a great game after all these years and if you’re able to take it out of the shadow of its predecessor you will enjoy it all the more.