The Blade Runner PC game is a 1997 adventure game from Westwood Studios. Rookie Blade Runner Ray McCoy is  investigating a mass-murder of animals – which is a big deal in the nightmare future of 2019 as real animals are practically extinct and are very expensive. McCoy soon finds out that this one crime is just one part of a much bigger plot. The animals were killed by a gang of rogue Nexus-6 replicants (I will assume you have seen Blade Runner and know the ins and outs so I hope I don’t have to explain what replicants are etc.) who have just started on a mad crime spree. McCoy’s job is now to hunt these naughty robots down. 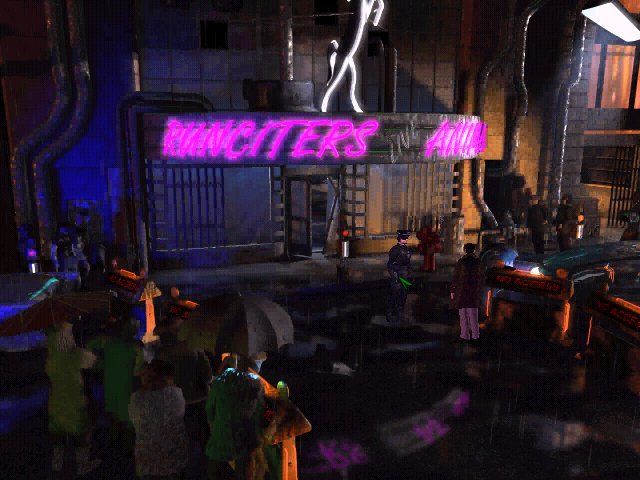 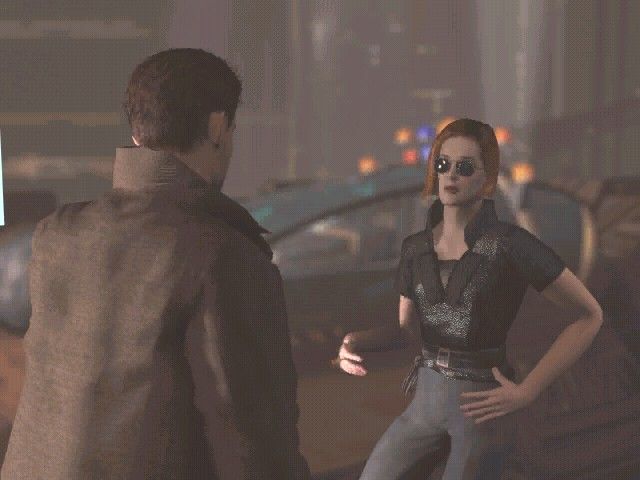 Westwood’s Blade Runner PC game from 1997 isn’t your usual movie tie-in. The story runs concurrently with the original 1982 Blade Runner film but it came out 15 years after the cinema original. Westwood’s game pitched an original story set in the same Blade Runner universe, happening at the same time and even in the same city as the original Blade Runner film. At times it feels like you’re treading in Rick Deckard’s footsteps. The plots of film and game dance and spin around each other beautifully, at times it feels like McCoy walks into a room just as Deckard has walked out of it. It’s like you just keep missing each other. Getting to cut about in the same locations as the film is a bit of fan service which is welcome to me, I really liked it. I love the original Blade Runner film. But there is a cynical part of me that thinks Westwood could have done anything with the Blade Runner game. The story could have been a sequel to Blade Runner. It could have been a prequel. They could have set it in another city, another country even. It comes off a smidge derivative, but the Blade Runner game story is still dark and unusual for a PC adventure game from 1997.

The game design present in the Blade Runner PC game is also atypical for a 1997 adventure game. McCoy is an LA detective, even though a future one, so nearly all of the gameplay is driven by dialogue. Blade Runner replaces the traditional PC adventure game inventory with a database of evidence which then generates dialogue options. By putting the onus on sleuthing about for clues and performing detective work the Blade Runner adventure game feels a lot like a procedural cop drama, which is a perfect use of the Blade Runner IP. None of that trying-everything-on-everything stuff you’d get in other adventure games. There’s a small amount of shooting in Blade Runner, which is great. Keeping the violent encounters few and far between creates maximum impact, because when it happens you know it counts. 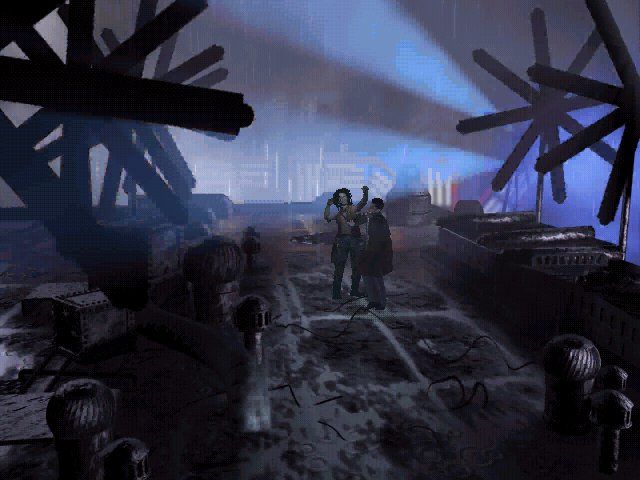 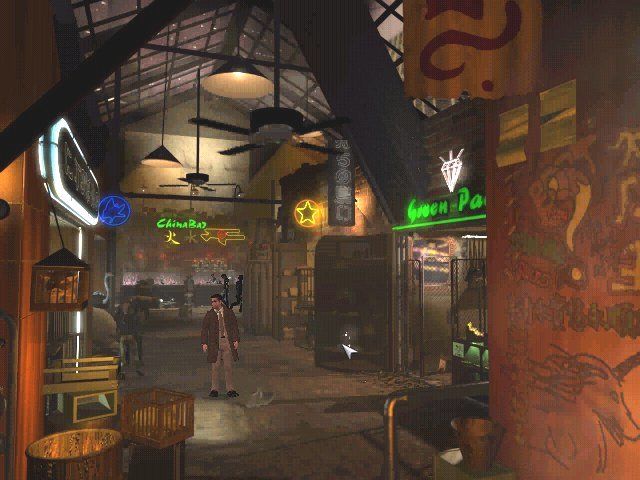 The best feature of 1997’s Blade Runner PC game is the impressive branching story. All of your in-game decisions, your conversation options and the quality of your detective work will impact the story. Depending on whether you arrest, kill or let your targets go; the way you speak to NPCs, the clues you find (or miss) all stack up and lead to one of 13 different endings. That’s already a formidable amount of development but Westwood doubled down on the opacity of your decisions in Blade Runner. At the beginning of every game, every cast member is randomly assigned as human or replicant. Each character assigns behaviours based on whether they’re a replicant or a human. They’ll go about achieving their objectives in the background, whether you’re witnessing it or not. You can play the same game twice and make exactly the same decisions but still get a different ending because of the random nature of the character spawning. I’ve not played a game from the last decade that attempts that level of complexity and opacity. It’s a fantastic concept! I will say though, that on our first playthrough it did feel quite vague. Some of the characters I barely spoke to and I only met one of the replicants I was supposed to be hunting once. By the end of Blade Runner’s story, I was sure there were loose ends I hadn’t tied up. It didn’t feel like a neat closed book. I think in order to have that branching storyline some of the finer details needed to be glossed over, so that Blade Runner would still work in a wider set of scenarios. You’re successful no matter which route you take, though. The game never paints you into a corner. There’s no right or wrong decision and a different play style would undoubtedly uncover more info. 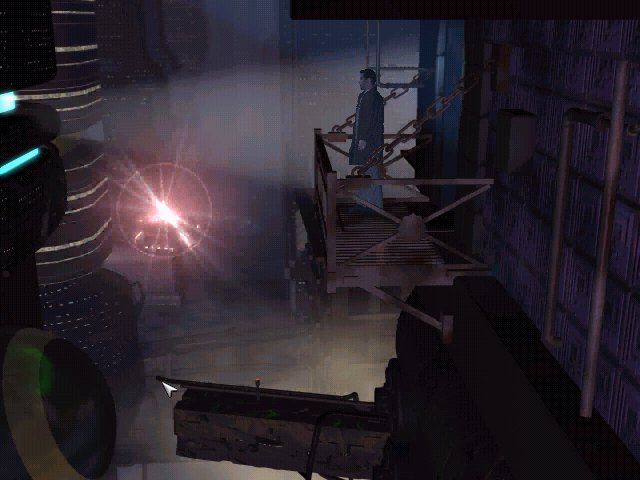 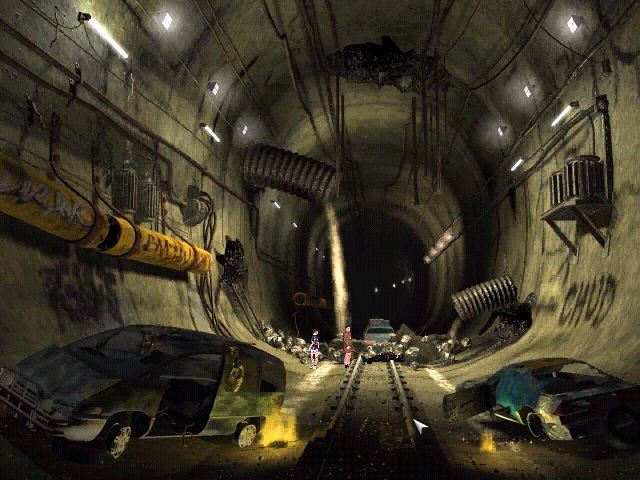 Blade Runner’s graphical style is great. Easily among the best of this era. For 1997, Westwood made the correct choice and stuck with prerendered 2D backgrounds with voxel-based 3D characters. Voxels is a bold move. It’s worth remembering that at that time the PC games industry was fast moving over to adopt full 3D games. 3D was seen as the next big paradigm in PC games, but 3D hardware was still finding its feet in the PC market. Graphics cards were still fairly primitive and very expensive. Historically we can look back and see how in a lot of cases jumping onto the 3D bandwagon early was a bad move. Plenty of 1997-era 3D PC games look awful now. It would have taken a developer with confidence to push back against that tide and say “No, this will look better in 2D”. Every detail of Chinatown and the Tyrell Corporation pyramids are beautifully represented in rain-soaked, dystopian detail. Best of all the wet, crumbling Bradbury Building perfectly recreates Ridley Scott’s gloomy vision of future LA. I’m so glad Westwood chose this graphical style for the Blade Runner game. We praised this game for nailing the Blade Runner neo-noir atmosphere, something a basic 3D game just wouldn’t have been able to achieve.

The gloomy dystopian Blade Runner tone wouldn’t be complete without the same care and attention to sound and music. Frank Klepacki’s Blade Runner score is brilliant. Klepacki was a Westwood Old Guard, probably best known for scoring Dune II and the award-winning music for the C&C series. Klepacki wasn’t allowed access to the original Vangelis master recordings, so instead he reconstructed the original Blade Runner score by ear, and it’s perfect. There’s a few new tracks too, with Klepacki again nailing that cyberpunk synthwave vibe. The assembled voice cast is fantastic, as I’d expect from this era. Westwood did a great job of assembling new and original cast members. Actors such as James Hong, Brion James and William Sanderson as JF Sebastian. They even convinced Joe Turkel and Sean Young to briefly appear as Dr Tyrell and Rachael. Sadly they couldn’t nail down Eddie Olmos, instead opting for a rough soundalike to play Gaff. 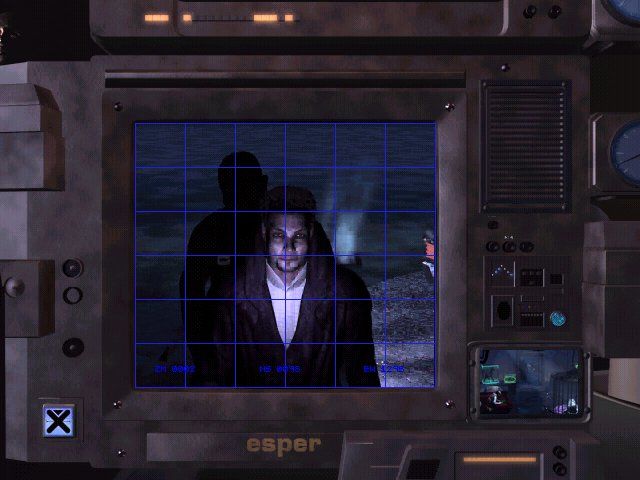 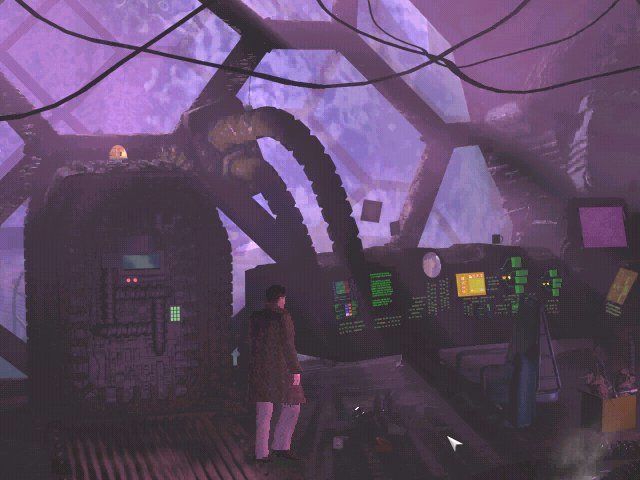 Blade Runner 1997 is a really enjoyable adventure game. The random generation of the cast and items means the story plays out differently every time, even before we get to player agency. The idea that we will all get a slightly different experience is an exciting one and is ambitious for 1997. Blade Runner’s high points are the excellent attention to worldbuilding and the richness of those branching paths through the game.

Despite selling over a million copies, the Blade Runner PC game made bugger all profit so any hope of a sequel was made untenable. Further to this, this Blade Runner PC game is likely to never be available on Steam or GOG. Westwood were acquired by EA in 1998 and then liquidated in 2003. When the remains of the studio moved to EA’s headquarters, the source code and assets to Blade Runner were lost. We’re talking about a terabyte of data in 1997 money. Despite EA owning the rights, the odds of a sequel or an HD remake are remote. To play the Blade Runner PC game you’ll need to track down an expensive physical CD-ROM copy of the game. For the effort though, I’d say it’s worth it. Blade Runner is one of the best adventure games from the 90s and it’s a genuine shame it’s so hard to track down and play.

You can watch a video version of my Blade Runner PC game review on YouTube.