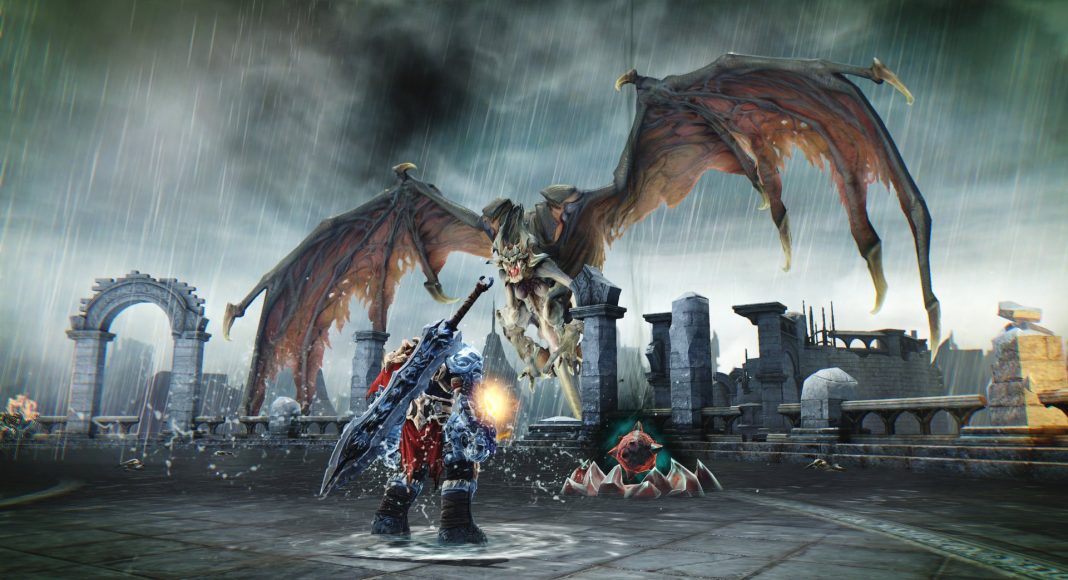 This is an archive review, from the olden days of The Game Show. Enjoy!

Have you ever heard of the word trope? Hailing from the world of literature, the trope is a word or a phrase which has taken on a significance of its very own and is used in a modern sense to underpin the language of film, TV and video games. We use tropes day-in, day-out to quickly and easily describe narrative, setting and characters of any piece of fiction. Some good examples are Kickass Anti-Hero; Post-Apocalyptic Landscape or War between Good & Evil. Each of those characters or situations can be imagined without any other input – you know entirely what I’m talking about right? Well that’s good, as I’ve just explained everything about Darksiders.

I could go on; Giant choppy swords, boss weak-points, talking during fights, evil towers, zombies and a whole host of others. Darksiders could almost be described as metafiction – it’s a huge melting pot of other people’s ideas, all thrown into one big game.

The story is one such example of this. Apparently accidentally triggering Armageddon, War – one of the Four Horsemen of the Apocalypse – is stripped of his powers as punishment. Confident the event was not his fault, War must fight both the powers of Good (represented by glittering, armoured angels) and Evil (epitomised as red-skinned, horned demons) to find the culprit responsible. Along the way ticking every box that Judeo-Christian mythology offers, with little altered for the purposes of artistic credibility. War himself is a composite character displaying a canny mix of hulking frame, cool collectedness and righteous fury. As the protagonist of the piece, he’s not your usual hero but the player can identify with his lust for vengeance just enough to care sufficiently about the outcome of the narrative. The interesting part is being caught between the forces of Heaven and Hell – the Horsemen being above Good and Evil, more primordial forces of nature – War’s apparent prompting of the apocalypse has pitted both parties against him. The linear, narrative-driven nature of the game essentially has the player travelling to numerous locations around post-apocalyptic Earth, tracking down the parties responsible for his punishment and butchering them in showers of gore. He is War after all. The story is an entertaining romp and proffers a few new concepts in setting, but ultimately offers nothing new in the art of storytelling – instead perhaps choosing to tell a story well, which is an admirable stance to take.

Darksiders can accurately be described as “Soul Reaver meets Zelda, by way of Devil May Cry”. Now readers might initially take that statement as a precursor to the game being boorishly derivative – after all, Darksiders isn’t going to be as good as the games it’s lampooning, so it could never be as fun. You would however be incorrect in that assumption; whilst admittedly nothing at all is original in here, the game breaks no new ground and leaves all envelopes discernibly unpushed, what the game does do, it does strikingly well. The game plays smoothly, most of the loading being achieved sneakily whilst the game presents you with a corridor or a brief fight in a booby-trapped room. The frame rate is always high despite sections where you’re fighting dozens of complex and detailed gribblies; there are varied plush environments to explore with the onus on puzzle-solving and backtracking rather than combat. When it is time to fight though, War is more than capable of laying the smack down; responsive controls and a host of combat moves keep the fighting vibrant and fun right through to the end of the game. You don’t require the catlike reflexes of Devil May Cry, the game opting rather for an input method better suited to Zelda players, but with dozens of combinations to learn, new weapons to unlock and special moves powered by War’s in-game currency, Wrath. The extra weapons are plenty of fun, adding variety to your combo chains. All of War’s weapons have a different feel, albeit not to the depth offered in other titles, Darksiders at least offers purposeful action and some stunning animations to boot.

Do enough damage to your enemy and a prompt will appear above your adversary’s head, to initiate a slow-motion finishing move – you know, like in God of War. Unlike God of War however, Darksiders does away with one of my many bugbears, the Quick Time Event. QTEs are a pox on video games design, seen as many a “neat” way to have action driving a pre-determined sequence. My hope is that Vigil Games realised this, and seized only the very best part of that particular combat experience, leaving the otiose QTE parts at the wayside. In fact, the design of Darksiders can accurately be summed up by extrapolating that mentality.

“I love that MetroidVania gameplay where a new talent opens up previous sections on the map, but I hate traversing vast distances like in Zelda. We need a quick travel system like in Soul Reaver, but nowhere near as difficult to use, like Fallout 3.”

“Agreed. Also, I want a tiered combat system with long combo strings like in DMC, but instead of the hack-and-slash bosses, I’d rather a more novel approach to the combat, like in Zelda.”

This convergent thinking essentially links three or four really decent games, exploiting the best elements of each but ultimately realising the flaws inherent therein and achieving a compromise between those gameplay styles. What you have left is a game with a combat system which is only just deep enough to keep feeling fresh throughout the game experience, a great emphasis on exploration and experimentation and difficult, edgy dungeons that make your hands sweat but garner significant reward. Although the game borrows its core elements from the past two decades of video games pedigree, it would not be fitting to call Darksiders a rip-off. Truthfully, what we have here is a game which has recognised fruitful design tropes and capitalised on them; Vigil Games have cherry-picked the best trends of some of gamingdom’s giants but have had the foresight to leave out the rebarbative elements of those very same games.

War’s inventory throughout the game continually grows – assumedly War is regaining his lost possessions (like Symphony of the Night), with all of these items gathered from fallen bosses or found in chests scattered around the game’s many dungeons. Usually War’s new item of wargear will be integral to the defeat of this dungeon’s boss fight (sound familiar?). The influences don’t stop there and you’ll be noticing more throughout the game – I’ll try to refrain from mentioning any more for fear of ruining some of the later stages of the game but each one never fails to draw a wry smile from this reviewer’s cynical lips. With the benefit of hindsight, Darksiders’ strength lies not in originality but in the high values upon which if firmly places itself; taking elements from some of the world’s greatest games, throwing them together and finishing with a high-buff polish. Everything in Darksiders has already been proven to work, so reviewing it is a bit like cutting up all my previous reviews and Pritt-Sticking them back together. The only downside to this method of making a game is that along the way, some finer details have been overlooked.

The gameplay can at times feel a little drab. Some of the older mistakes have bled through the mesh, although admittedly these sins are forgivable in the bigger picture. One thing I hated about Soul Reaver 2 was the combat scenarios where mystical barriers would materialise around the area preventing Raziel from progressing until he’d slain his enemies. This appears several times in Devil May Cry and myriad other action games to boot. It happens to appear in Darksiders too and whilst it’s annoying it doesn’t seem to affect the pace of the game, which is why I detested it in SR2.

Darksiders does one thing which not enough games do and that’s to excel at visual style. Vigil bring a unique art style with outlandish proportions and eccentric comic-book character designs, with absolutely gorgeous backgrounds to boot. The rakish visuals are spearheaded by the game’s creative director; Marvel Comic’s own Joe Madureira. An industry legend, Joe Mad has worked on X-Men, The Ultimates, and his own title Battle Chasers – Madureira cut his gaming teeth on Dungeon Runners a few years back, which I thought was a humorous composite of all MMORPGs; perhaps Darksiders is a spiritual successor to that satirising concept whilst only skirting the repetitive dungeon trawler. Those same iconic graphics are present throughout the entire game; brilliantly detailed and spectacularly-animated characters populate richly-detailed and jaw-dropping locations. That Joe Mad style cohesively links the many varied locations, tying everything together into a neat visual package. There are also some tremendous snippets of personality in the otherwise empty landscape – if you ever find the gentlemanly skeleton sporting a top hat you’ll know what I mean!

There is however a slight feeling though that anything in Darksiders that doesn’t directly borrow from an established franchise feels a little lacking. The game world itself, whilst beautiful, does lack a sense of depth and realisation. Walking around impressive vistas is always aesthetically pleasing, but they lack essential character or any sense of weight.
Perhaps in testament to War’s strength and resolve, none of the enemies – bosses included – ever feel like a real threat. A theme that’s actually touched upon in-game, no matter how much bigger, scarier or plain uglier than War the bosses are they all show some degree of reverence to the Horseman and unfortunately die a little too easily. Even on Apocalyptic difficulty gamers may never attempt a boss more than twice before defeating them. Perhaps this goes some way to dealing with Devil May Cry’s boss fight difficulty spike and certainly keeps the story’s pace up but I can’t help feeling that although War is supposedly weaker, nothing really poses any great threat to him.

So whilst combining the greatest elements of video games history into one game seems like a great idea from the initial outset, bringing the whole product together without exhaustive attention to the minutiae of the gaming experience does leave you with a game that’s substantially smaller than the sum of its parts. Darksiders is a great game almost entirely due to its ethos of Standing on the Shoulders of Giants, with its fantastically colourful and unified art style heaping a ton of extra charm on top. With only a little more courtesy for craft, Darksiders might have made my list of all time best Xbox 360 games. As it is I think it’s one of the finest examples of the action adventure genre of the current generation, falling just inches short of greatness.