This is gonna be a long PC game review, because I love this adventure game! Released for the PC in 1998, Grim Fandango is the pinnacle of the adventure game genre and is probably the best game to ever come from LucasArts. Bold claim, I know. Grim Fandango’s high concept is: Film noir meets Aztec mythology and Art Deco in the afterlife. Also there’s giant bees.

The Grim Fandango PC game is set in the Land of the Dead. Turns out the Aztecs were right. Everyone in the afterlife looks like those cute little Mexican folk art skeletons. You play as Manny Calavera, the Grim Reaper. Well actually, he’s one of several Reapers, and in this world Death is more of a travel agent. In the original Aztec mythology, the souls of the newly-departed face a perilous four-year journey through limbo, before they reach what’s called the Ninth Underworld. On foot, the journey is dangerous, with a high chance of being eaten by demons or smashed to smithereens by supernatural forces. Now, Manny’s job is to upgrade these souls to a better travel package. If you’d lived a virtuous life you might qualify for a Golden Ticket on the Number Nine express train, which zips you straight to Heaven in just four minutes. Grim Fandango creator Tim Shafer is known for having a bizarre imagination and a taste for the oblique, with Grim Fandango showing you can clearly add a dark sense of humour to that list. 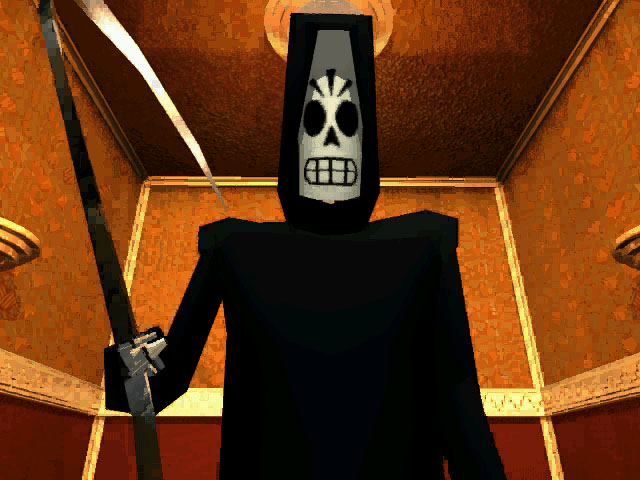 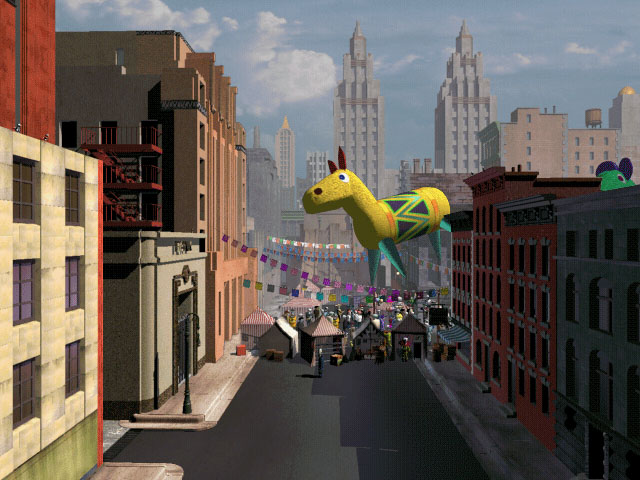 Manny’s big problem is that he just keeps getting deadbeat clients, who have to make the four-year journey on foot whereas his work rival Domino is getting all the Gold Ticket clients. Domino is one of those sales wankers, you know the type and poor old Manny just can’t catch a break. Manny starts to suspect that something fishy is going on, and so begins a story of love, betrayal and tiny skeleton birds with human faces. I’m making light, but really, there’s some really interesting themes at play here. The characters Manny find himself up against are really despicable. These people were obviously gangsters in life, and they remain gangsters in death. And so why move on? They know that whatever waits them in the next life is almost certainly going to be worse than where they are now. They’ve figured they might as well stay in limbo forever. By exploiting innocent souls, they can elevate themselves into positions of power, money and influence. Better to rule in Hell than serve in Heaven, right? Scratch below the surface and that’s some pretty dark subject material, and I originally thought Grim Fandango was a goofy story about skeleton travel agents selling train rides!

Manny’s an interesting character, too. He’s working as a Grim Reaper, he’s not on his own four-year journey. He did something when he was alive which left him with a debt to the “powers that be”. We never find out what it was, but I can’t help but wonder what Manny did when he was alive that means he’s not allowed to leave purgatory. He starts the game as your quintessential noir protagonist; bleak, cynical, aloof. But in classic Film Noir fashion, over the course of the story he grows into a better person and the finale to the story is that much more satisfying. I don’t want to say anything else, because Grim Fandango has honestly one of the most original and charming stories in any computer game. 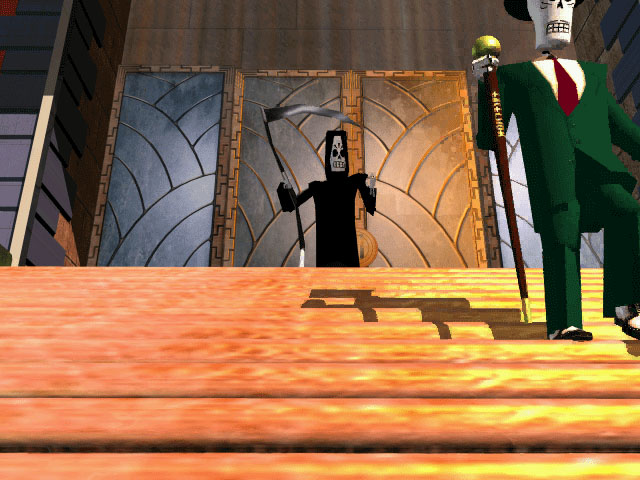 What really sells that story though, is the atmosphere. Tim Shafer and the LucasArts team somehow managed to combine Aztec mythology and Film Noir and not make it shit. You’d expect those themes to be like oil and water but they pulled it off. Most of the Land of The Dead is decked out in art deco, but realised through that LucasArts lens. All the skeleton characters are so strikingly individual and all the fashion is just flawless mid-century, reiterating that brilliant Film Noir atmosphere. Visually, Grim Fandango is still one of my favourite PC games. In 1998 LucasArts had some fantastic staff members like Leslie Aclaro, Peter Chan and Linda Grisanti, who did sterling jobs making sure all the disparate, exotic locations in the game are all pinned down with a consistency and detail that only LucasArts could muster.

Added into that mix is a brilliant soundtrack of 1930s/40s style music. A wicked blend of swing, big band and mariachi, again somehow all working in unison to give this game identity. Grim Fandango’s music was composed by Peter McConnell and that man’s CV is unreal. He’s done it all. From Monkey Island 2, Sly Cooper, Brutal Legend and Hearthstone. Chances are you’ve heard and loved this guy’s music and Grim Fandango is possibly his strongest work. Pulling together those disparate styles and giving the soundtrack its identity echoes that “We can do it” attitude that bled out of these LucasArts games.

While we’re on the subject of audio, the voice acting is flawless. In my opinion this is  one of the most important factors of an adventure game. Manny Calavera is voiced by Tony Plana, who was Omar in 24 and Rafael Hernandez in The Punisher. Grim Fandango’s voice cast members include Maria Canals (who is Hawkgirl in everything), Pamela Adlon (who won an Emmy for her performance as Bobby in King of the Hill), The voice of Rita Repulsa Barbara Goodson and Ultra Magnus himself, Jack Angel. Alan Blumenfeld is the standout performance though, as Manny’s sidekick Glottis. I just love him so much and he still has me laughing out loud after all these years. 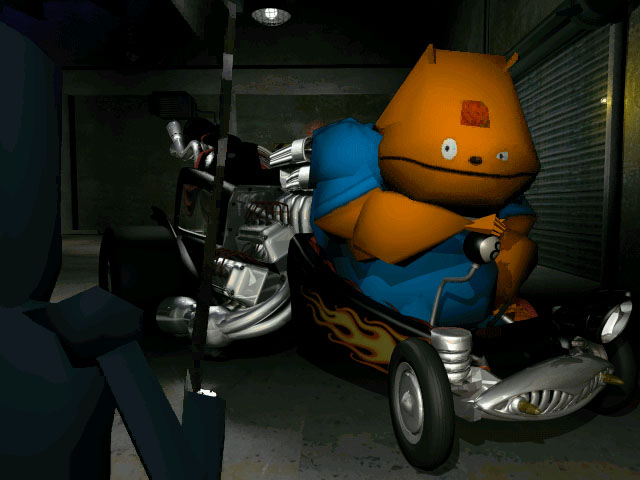 A lot of talk about a computer game so far, and I’ve not even spoken about the actual gameplay! Like most LucasArts adventure games, gameplay in Grim Fandango is moved along by solving puzzles. By and large, the solutions follow the usual adventure game logic, so if you’re getting stuck, there’s probably something you’ve missed. There is always the classic “try everything on everything” school of thought which usually works, but you should be able to figure most of the puzzles out. A brief warning though, the puzzles in Grim Fandango are all a bit knottier than other LucasArts games. Monkey Island might have a few obtuse puzzles, but there’s a couple in Grim Fandango that really take the piss! Overall though, Grim Fandango has some of the most rewarding puzzles. The game knows it’s hard, but when you put two and two together it’s a great feeling. 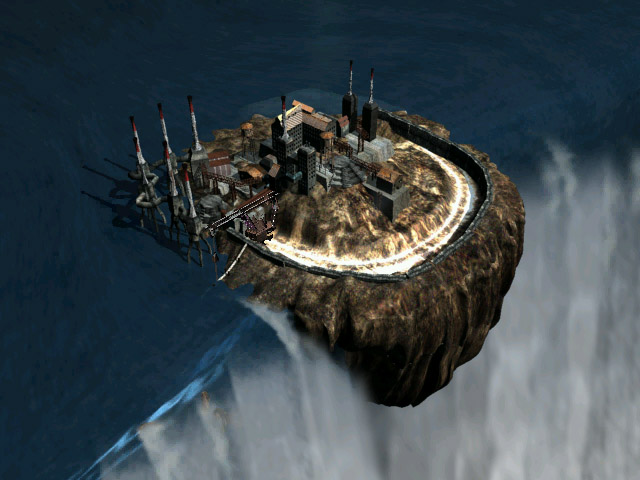 As much as I love adventure games, by 1998 the scene was dying out. Shooters were still in their infancy, but they were poised ready to dominate the face of PC gaming for the next twenty years. Grim Fandango was Tim Shafer’s attempt at rejuvenating the adventure game genre, but it ended up being something of a swansong. LucasArts invested a massive 3 million dollars into the game’s budget but sales did not do the game justice. Despite absolutely smashing reviews and winning awards across the board, some reports claim as little as 100,000 units were sold. As far as I can tell, Grim Fandango is the only LucasArts game that didn’t turn a profit.

LucasArts forever moved away from the adventure game genre after Grim Fandango, but we’ve seen some great new titles come up recently. Grim Fandango received a Remastered edition courtesy of Tim Shafer’s company Double Fine, after they acquired the rights from Disney after they closed LucasArts in 2012. The remastered Grim Fandango has upscaled graphics, new character models and lighting and includes a more traditional point and click mouse interface. It’s every bit as good as the original and in some ways it’s improved. Grim Fandango Remastered can be bought from Steam or GOG for the bargain price of a tenner. When I started doing these Second Wind PC reviews, it was my intention to celebrate the past, and to showcase great PC games that you might have missed. And with these classic old games getting HD remasters and such, it’s a great opportunity for you to give this game a Second Wind yourself. If you’re a fan of adventure games and you’re looking for something with a bit of panache, then you’ve found it. I’ve played a lot of adventure games, but I’ve never played as good an adventure game as Grim Fandango. 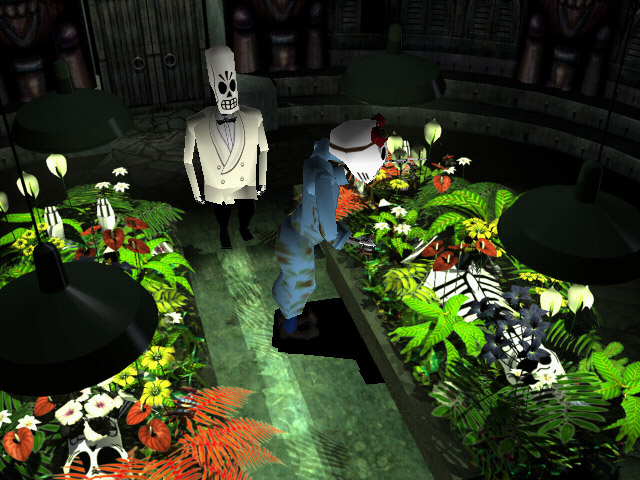 Grim Fandango is in my top three PC games of all time, on a good day I’ll say it’s my number one. It’s not perfect, no game is perfect. But the atmosphere, the storytelling, the creativity and the excellent worldbuilding make Grim Fandango an experience that I just cannot get enough of.