Jedi Knight 2 mate. It’s my favourite Star Wars game ever. And probably in my top 10 PC games ever for that matter.

The story is set two years after the last game. Kyle Katarn has fought the Empire, the Dark Troopers; in Jedi Knight he found out he was Force-sensitive and he nearly fell to the Dark Side TWICE. Because of that he’s completely turned his back on the Force. He’s already lost too much to the Dark Side and he doesn’t want to involve himself in that fight. Cutting off his connection to the Force, he leaves it all behind and goes back to mercenary work with his old trusty pilot, Jan Ors. 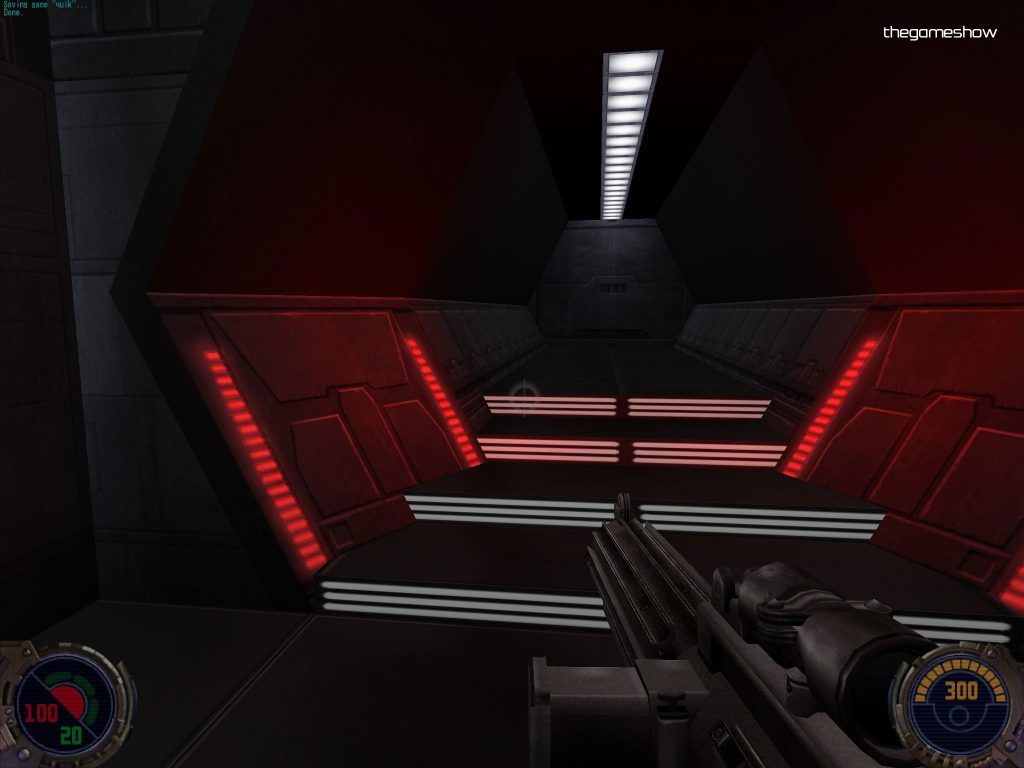 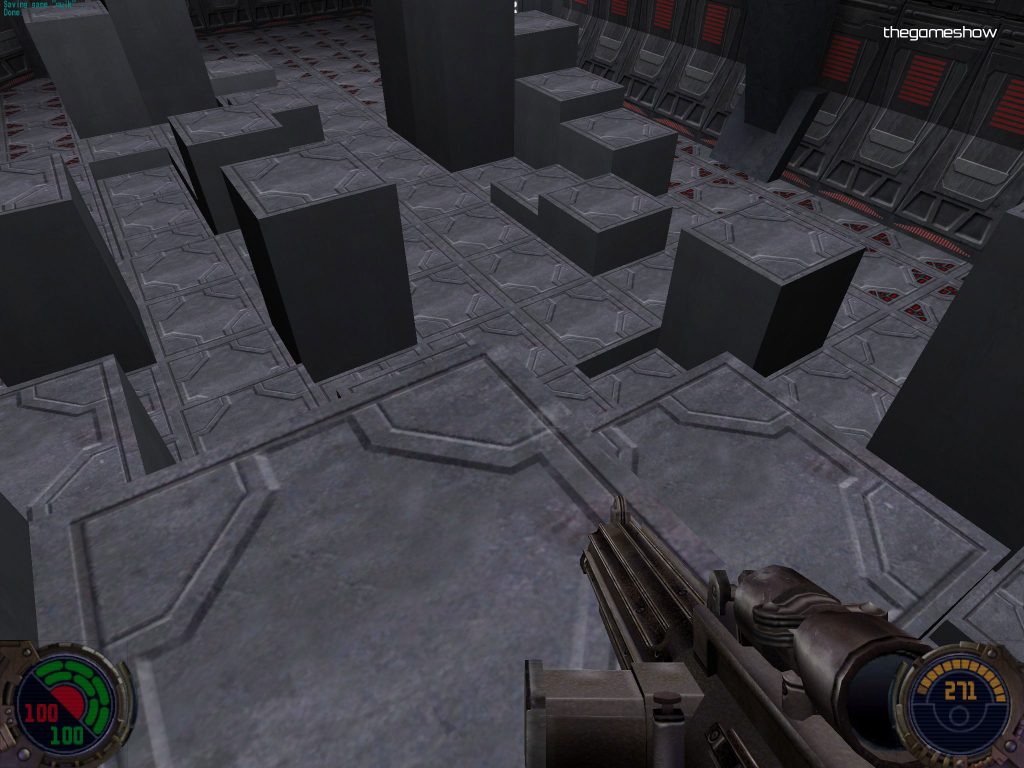 Jedi Knight 2’s story is pretty solid and follows the usual template for games of this type. After taking on what looks like a pretty standard job, Kyle and Jan uncover some mysterious goings-on. The Imperial Remnant are trying to artificially infuse the Force into people using magic crystals, to make an army of Dark Jedi which they call the Reborn.

Kyle eventually runs into the Dark Jedi, Desann and boy is he outmatched. I’m trying not to give away too much but Kyle is soundly beaten and is given a lot of motivation for revenge. Kyle is motivated to get his Force powers back and he spends the rest of the game tracking down Desann with the intention of killing him.

That’s a pretty cool edge to a central Star Wars character. What I love about Kyle Katarn is that he isn’t your clean-cut Jedi Knight hero. We’ve already seen in the previous games that Kyle wasn’t ever really a good guy. He’s motivated by revenge more often than not and now we see him brought back into this fight against his will. Kyle’s not an optimistic goody two shoes like Luke; he’s seen what the Dark Side can do. He’s jaded, angry, out for revenge. Obviously you’re not playing a villain, but you’re playing as a real, flawed human being in a universe of impossible superheroes.

Kyle Katarn is my favourite character from the Star Wars Expanded Universe. He was my first exposure to the concept of the Grey Jedi; a Force-user who walks the line between light and dark. Something which would later be explored further with characters like Revan from KotOR or Asohka Tano from Rebels. Kyle is taking the fight to the Dark Side, fighting fire with fire. Given enough time he’ll probably fall to the Dark Side too, but he can’t see any other way.

In terms of the way this plays out in the gameplay, Kyle’s Force powers develop on a linear path from beginning to end. Jedi Knight 2 doesn’t waste time telling you if you’re being good or evil, it embraces that grey Jedi idea and just lets you get on with playing. The skilltree just opens up as you play the game with new powers – a mix of both light side and dark side – getting unlocked or upgraded between set missions. It’s a very linear story, there’s no branching good or evil options like in previous games. And I guess the Force powers are part of that experience so there’s no branching skill tree either. On this level you’ll need Jedi Mind Trick, and so it automatically unlocks. Raven could have gone with a Morrowind open world style, but they didn’t and the game doesn’t suffer at all. They wanted to tell a specific story so they stuck with it. 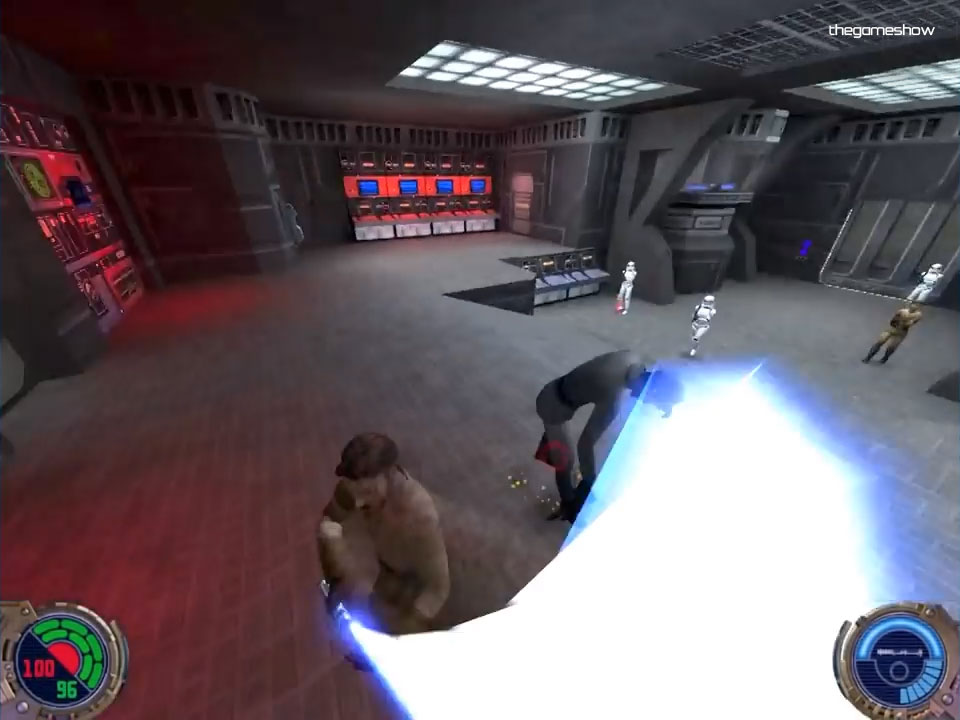 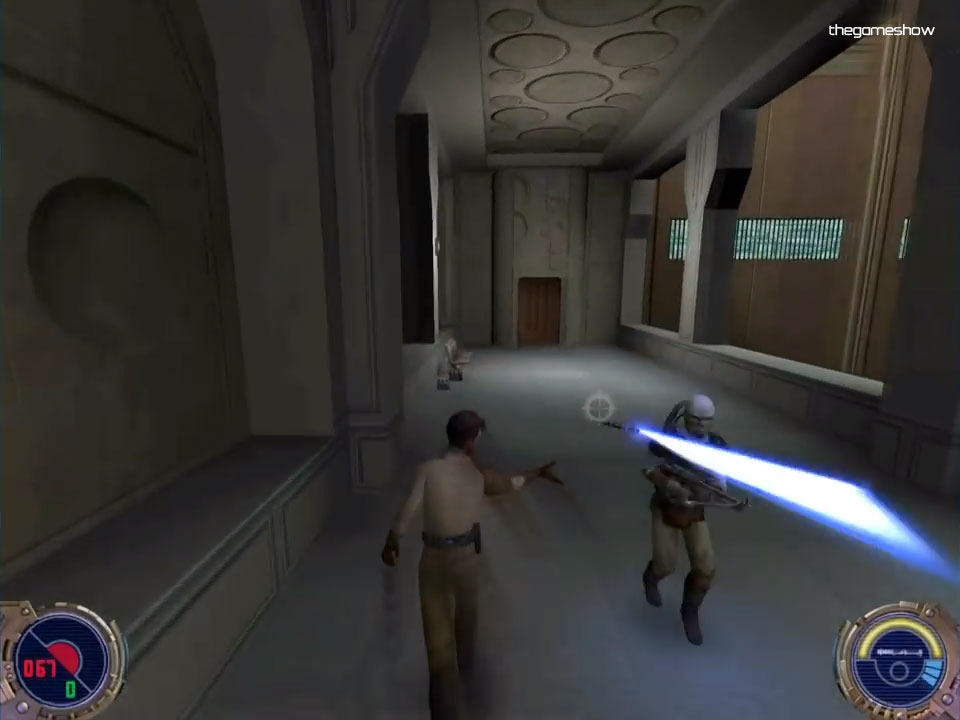 And it works. It’s pretty much like the games which came before it; following the clues from planet to planet, unravelling the mystery of the Reborn. Jedi Knight 2: Jedi Outcast really captured that Star Wars adventure game feel, with Kyle going all over the galaxy, getting into scrapes and hunting down the bad guys. This is helped by a brilliant voice cast; usual suspects like Steve Blum, Bob Bergen and Kevin Michael Richardson deliver brilliant performances but of course for me the standout is Billy Dee Williams himself appearing as Lando. My two favourite Star Wars characters, smashing shit up on the Lady Luck. Every location in this game is big and rich and detailed, but not so completely directionless like in previous games. Levels are way more linear but they’re laid out perfectly. The level design is the best it’s been in this series; there’s still hidden areas dotted about but I don’t think you’ll get lost at all unlike the massive levels from Dark Forces or Jedi Knight. The puzzles, too, are good. Not too obtuse like in previous games, by and large they’re easily solved with a bit of Star Wars logic and careful application of your Force powers and/or lightsaber.

And now we get onto the bit that I really want to talk about. My GOD are lightsabers good in this PC game. Jedi Knight 2: Jedi Outcast is the gold standard for lightsaber games. Force unleashed may have all that mad technology going on but Jedi Knight 2 is the king. OG. Just an incredible lightsaber game.

Mate, to say it’s better than the previous games isn’t enough. It’s the best it’s ever been and it ain’t ever gonna get that good again. Kyle starts out with one lightsaber form but as the game goes on he’ll unlock three. It’s your usual fast-medium-strong setup, but each style does actually have a part to play in the combat. The fast form carves mad combos and it deflects incoming fire with a comedic level of accuracy. Strong stance will fuck anybody up with one hit but leaves Kyle wide open if it whiffs. You can even spot what style the bad guys are using and you can change up your style to better fight them. You can switch form mid-fight and obviously combine lightsaber attacks with force powers or other weapons if you want. It’s so flexible, man. It’s the best lightsaber experience ever. You will feel like you’re controlling a legit Jedi. The only crime is that the system hasn’t been built on by newer games; Force Unleashed was all piss and vinegar compared to the finesse of Jedi Knight 2. 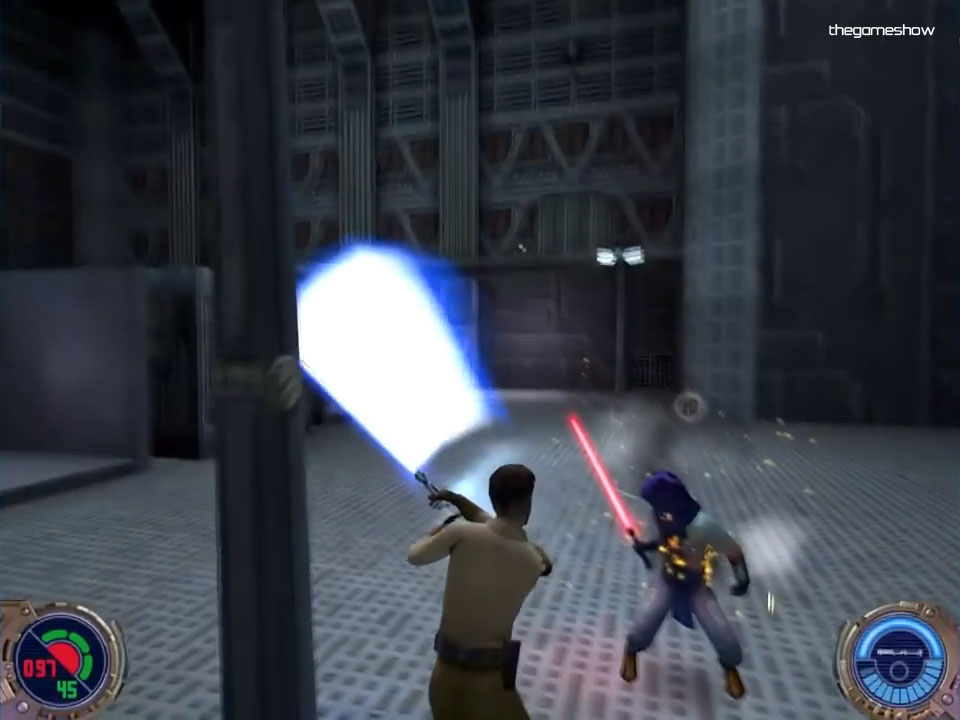 The intricacy of the lightsaber combos, the stacking of those combat forms and powers has not been beat. There is still a competitive online scene for Jedi Knight 2 and mate, the things these guys are able to do. The actual depth of the lightsaber combat is like Smash Bros; pro players have found almost like glitches or exploits in the engine to take multiplayer to mad limits.

The lightsaber combat alone in enough to make sure Jedi Knight 2 will always feature in my top Star Wars games. But add into that a wicked character who you can get behind, and the kind of heart and soul – the sense of fun – that developers used to put into these games, you’ve got something which is more than the sum of its parts. If you’re only ever going to play one Star Wars game, play Jedi Knight 2: Jedi Outcast

You can also watch my Jedi Knight II review here too.