The Secret of Monkey Island

The Secret of Monkey Island Review

My name’s Guybrush Threepwood and I want to be a pirate! Probably the most iconic opening line in any PC game. We’re given everything we need to know about this character and what to expect from this game. Nearly 30 years on, The Secret of Monkey Island is still a banger.

I am going to be short because there’s plenty of Secret of Monkey Island reviews out there. The Secret of Monkey Island is about Guybrush Threepwood, a happy-go-lucky moron. He actually wants to become a pirate some time during the 17th century. It’s a decision he would live to regret were he blessed with enough intelligence to understand the gravity of the situations he finds himself in. The first chapter of The Secret of Monkey Island’s story sees Guybrush attempting to complete three challenges in order to become a fully-fledged pirate. Before long though he’s caught up in a swashbuckling story of love, adventure and spooky ghost pirates. 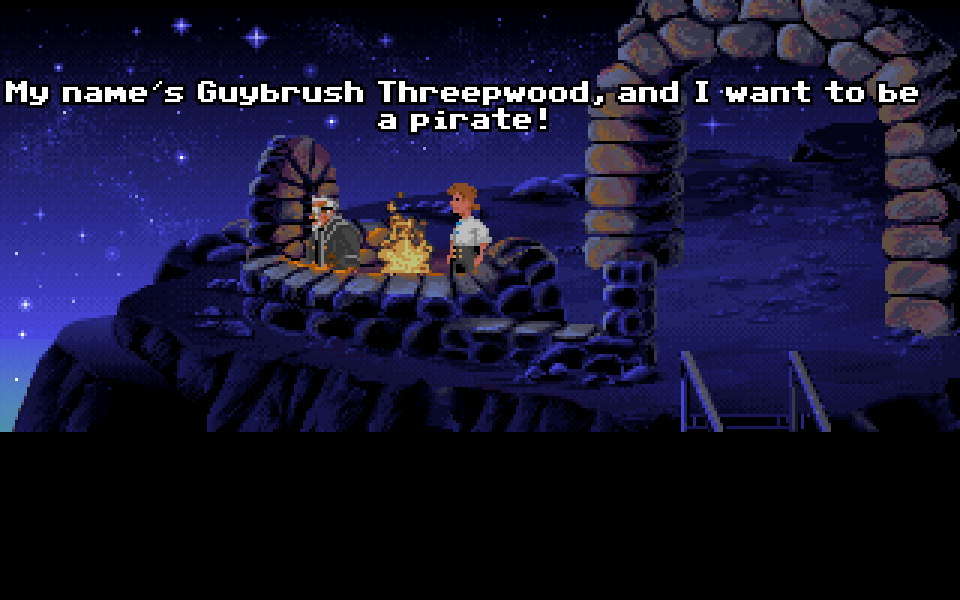 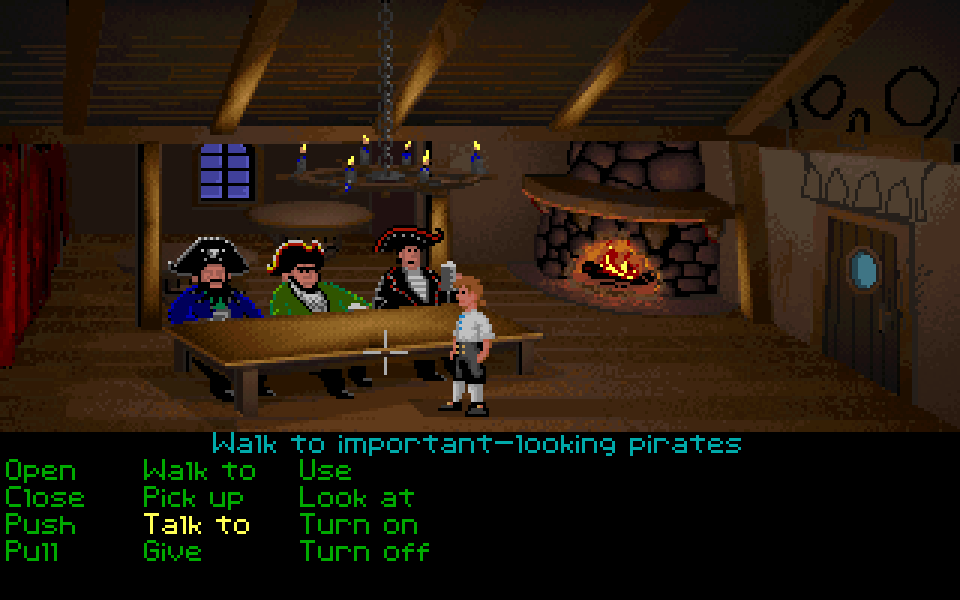 Clearly inspired by Disney’s Pirates of the Caribbean ride, The Secret of Monkey Island’s number one asset is the quality of the writing. Guybrush is your typical hapless adventure game protagonist. His ignorance and stupidity never fails to surprise and I found completely charming.

Threepwood’s love interest Elaine Marley is one of the most kick-ass women in computer games. Even though she’s barely on screen before being kidnapped by the ghost captain LeChuck. It’s a cool trope to have inverted in the game. Elaine is more than capable of taking care of herself but keeps finding herself in deeper water due to Guybrush’s repeated bumbling attempts at rescuing her. Left well alone, she’d be better off. It’s the opposite of the kind of stuff seen in films of the time like Indiana Jones or Romancing the Stone.

The principal cast are just deep enough to keep the story going. I found it’s the supporting cast who really shine in this game. The colourful characters Guybrush meets on his adventures on Melée Island and beyond are what makes The Secret of Monkey Island worth playing today. That’s where most of the laughs can be had. And I did laugh at this game, out loud and often. I was actually surprised at how often the game made me laugh, considering I’m reading silent text off my laptop screen. That’s a testament to good comedy writing. 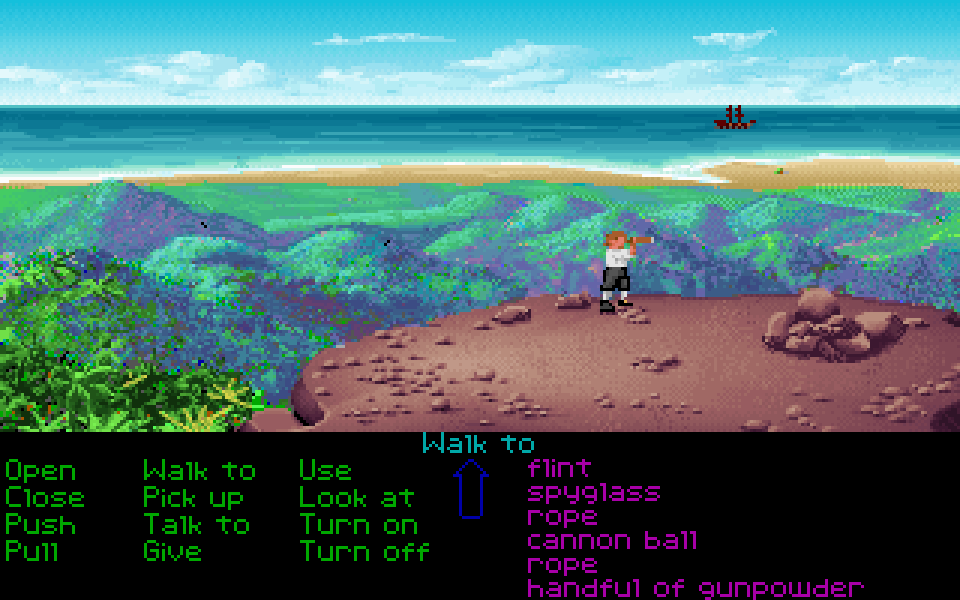 I’d say the irreverent 90s humour is probably The Secret of Monkey Island’s strongest suit. The principal cast and the story are fine but the jokes are top of the shop. It was clearly funny in its day but crucially it’s still funny now, which can’t be said for everything from 1990. The Secret of Monkey Island was created as a collaboration between Ron Gilbert, Tim Schafer and Dave Grossman, three giants of the adventure game world and their work here makes Monkey Island a seminal game.

It’s the adventure game design which makes The Secret of Monkey Island fun to play today. Adventure games before Monkey Island, like those from Sierra On-Line and Infocom, tended to be pretty unfair. Players could be killed for making the wrong decision and would often find themselves painted into a corner because of an earlier mistake. They’d have to start the whole game over. Monkey Island changed that with what I’ve come to refer to as the LucasArts method. You can’t fuck anything up so badly you fail the game and it’s really really hard to kill Guybrush.

The action menu at the bottom is archaic compared to modern adventure games. Most games since the mid 90s have adopted a contextual mouse which offers sleeker gameplay and less redundant options. With that said this menu is a massive step up from text parsers, something which the game’s creator Ron Gilbert was always dead against. The gameplay was designed to be player-friendly first and for a 1990 title it definitely succeeds. Even now, nearly 30 years on, the game is beautifully simple to get through. Adventure game puzzles do require a bit of moon logic sometimes, it’s like a vocabulary you need to learn. The Secret of Monkey Island’s puzzles tend to follow that LucasArts adventure game logic, so as long as you’re able to think laterally you won’t be left scratching your head for too long. I didn’t struggle with the game and I’m not a smart man.

As a testament to the legendary status of this game, its three creators are all heralded as geniuses in their own right. Playing The Secret of Monkey Island is like watching a film written by Francis Ford Coppola, Shot by George Lucas and directed by Steven Spielberg. 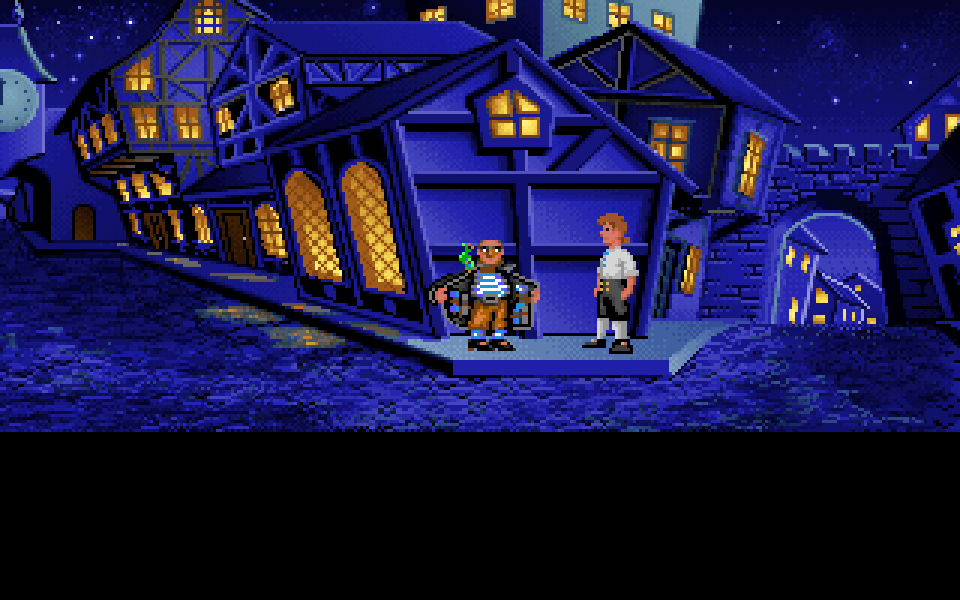 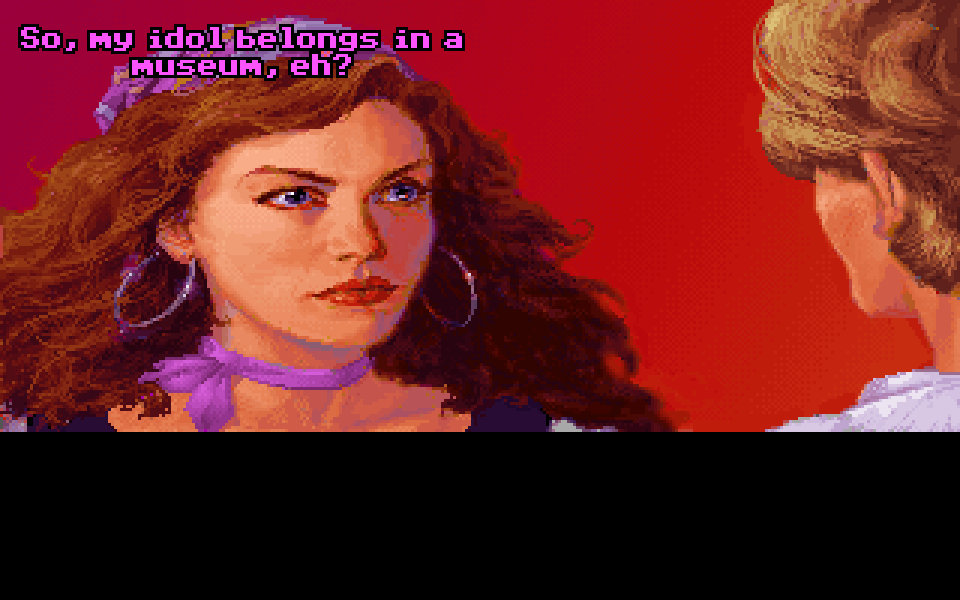 The Secret of Monkey Island was remastered in 2009 and was re-released for iOS, PC and Mac, Xbox and PS3. The updated version has higher resolution digital painted art and features a full voice cast. The high res graphics feature the same number of animation frames as the original game. I don’t actually like the look, I find it kind of janky. I prefer the look of old pixel art. The good news is you can play Monkey Island Remastered in the original format, which suits me perfectly. I’ve played it both ways and I prefer the original. And that’s without nostalgia, I only played it this year remember? 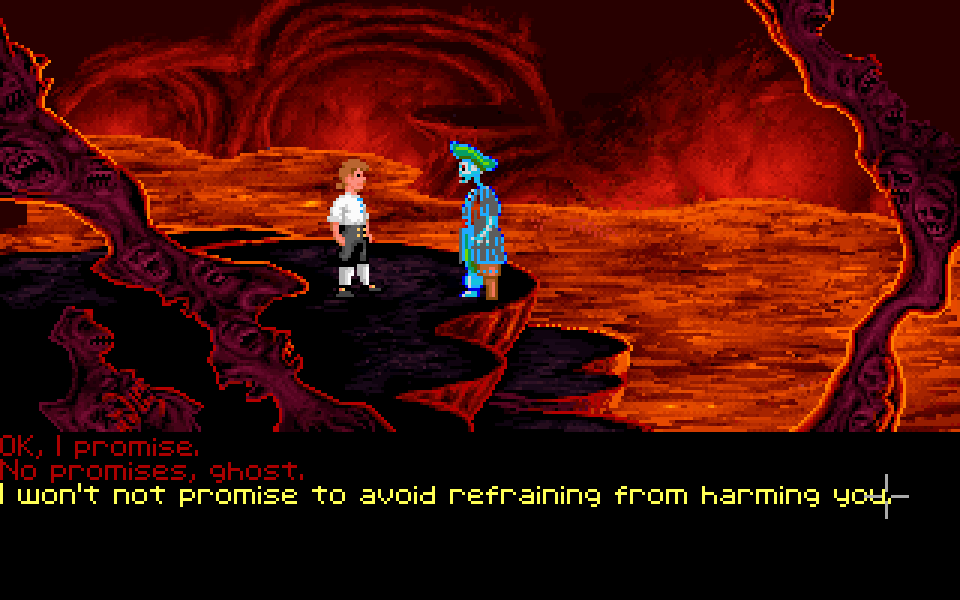 Despite the game being an early DOS game with no sound, I have to give a shout out to that music. One of the most iconic midi themes of the DOS era, the Monkey Island theme is a cracker.

The voice actors LucasArts brought in were a mixed bag but with some real standouts. The great Earl Boen plays a brilliant LeChuck but again, the supporting cast shines here. Cam Clarke (better known as 80s Leonardo) is great as Meathook. It’s the workhorses who are taking on multiple roles who really sound like they’re having fun. Wally Wingert, Jess Harnell, Roger Jackson and one of my all-time favourites, Rob Paulson all get stuck in with ensemble characters. LucasArts old guard David Collins even sticks in an appearance. I love me some voice acting. Especially when Mojo Jojo is playing a rat.

You can buy The Secret of Monkey Island remastered on all digital storefronts. I suggest Steam or GOG because even with the new contextual cursor the game is far more suited to the PC. The Secret of Monkey Island remaster is a great way to celebrate adventure games of the past. That’s what I’m all about here when I make these Second Wind reviews. If you’re keen to grab a physical copy for your old PC, I’d try to get hold of a CD copy as they tend to be cheaper. It’s not a cheap game to get hold of though, so prepare your wallet.

You can watch my The Secret of Monkey Island PC game review here on YouTube.